Every 67 seconds, someone in the United States develops Alzheimer’s disease, and although it may not be the leading cause of death in the U.S., one in three seniors dies with Alzheimer’s or another type of dementia. You may very well have found your life touched by this awful disease from a family member, relative or friend. Managing life with Alzheimer’s puts an immense stress on the individual, their families, friends and caregivers. So immense that in 2013, 15.5 million caregivers estimated 17.7 billion hours of unpaid care valued at more $220 billion. Deaths from Alzheimer’s have increased 68 percent between 2000 and 2010, while deaths from other major diseases decreased, and it’s estimated that by 2050 the number of people living with Alzheimer’s will triple. 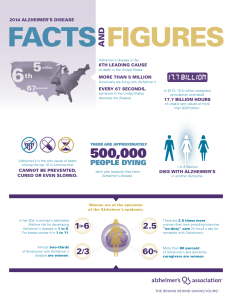 According to the Alzheimer’s Association, “Alzheimer’s disease is the only cause of death among the top 10 in America that cannot be prevented, cured or even slowed.” But research as recent as two weeks ago may offer a different look at prevention for this disease. During the Alzheimer’s Association’s International Conference, on 07/16/14, Dr. Miia Kivipelto, announced preliminary findings from a two-year study of over 1260 individuals, age 60-77, at-risk for dementia (all individuals scored above a cut-off point for cognitive impairment). The individuals were randomly divided into two groups, the intervention group receiving a multi-component program targeting diet, exercise, heart health and brain and social engagement, while the control group received only general health advice. The early findings are a 40% improvement from the intervention group to the control group over the two years. A follow-up 7-year study is also being conducted to help understand long-term benefits of the intervention.

Although it is difficult to say whether this preliminary evidence will lead way to definitive dementia prevention programs or slow the progression of the disease for individuals who have already been diagnosed, it does prove that it is never too early to focus on your overall health. At Carolina HealthSpan Institute, we may specialize in Hormone Replacement Therapy, but at the core of our care, we practice preventive medicine, and we have taken many steps to integrate advanced services into our practice in order to offer the best preventive care possible to our patients. Heart and brain health are two areas we have focused on extensively over the past 10 years, and over the past year we have developed specialized programs in conjunction with major technology and research groups to detect precursors of neurological and cardiovascular disease. We have also developed multiple programs to help prevent, or at the very least delay the effects of many neurological or cardiovascular diseases.

Without proper testing, there is no way to determine what your risk level is for these disease processes, and one visit to our office could give you a much better understanding of your health baseline.

Please send us an email or contact our office at 704.333.4817 to book a consultation or for more information.

Below you will find the full press release from Dr. Miia Kivipelto. She starts speaking at time marker 5:50.

Thank you for subscribing!